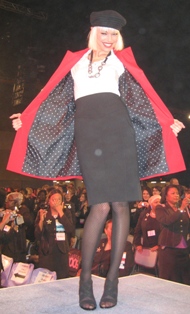 Check out this director communication…. Mary Kay Inc. doesn’t want consultants to know about the new Red Jackets and the promotion associated with.  The key here? They don’t want to risk having consultants hold orders. That’s right… the Mary Kay mantra of order early and order often is alive and well.

It has been a crazy day with re-entry but I wanted to pass on information regarding the New Red Jacket design launch.  I called the Red Jacket department and asked them lingering questions after we were privileged to see the redesigned jackets coming at Leadership.

1)  Are we to release this information to our consultants?  They strongly suggest that we DO NOT put the new pictures on our unitnet sites or send via email.  They want us to concentrate on the Movin’ on Up promotion for Career Conference.  Work in the current month or quarter!!  Don’t jump ahead for then when you need a boost it is already old news.

2)  When will Mary Kay debut the new Jacket designs?  There is a “Red Jacket Rally Promotion” coming for the next quarter where the consultants will have the opportunity to earn one of the new Red Jackets FREE and pick it up at Seminar 2009.  NO ONE can order the new jackets until after Seminar 2009.

3)  What is the Red Jacket Rally Promotion details?  The department did not have the details of the promotion.  It will be released to the directors when it is to launch.

I totally agree that if the new spring product launch or the new Red Jacket information is release early it does HURT us by consultants holding orders or holding team members so they can get the new Red Jacket later.  Just let your consultants know that exciting things are coming their way so be sure to get them to Career Conference for all the details.