A couple of years ago, I did this exercise on Pink Truth, examining who was really selling these cosmetics. One of our members did a similar thing on the discussion board yesterday, so I thought it was a perfect time to re-run this. The dates change, but the numbers don’t. Each time I’ve done this, we have seen how the top “sellers” in a unit or area aren’t making much money, even if we give them the benefit of the doubt and assume they’re selling everything they’re ordering.,

We often hear from the other side that they’re oh-so-profitable because they’re selling so much and making their big 50%. But we’ve all been there, and we know that the bottom line is that almost no one is selling a decent amount of product. Sure, Mary Kay has consultants with 20 or 50 customers if they’re lucky. And if they’ve been in a while, they might even have 100 customers.

And 100 customers sounds impressive if you’ve not experienced Mary Kay firsthand or if you’re listening to the bogus numbers a recruiter gives you. Those bogus numbers recruits are given are often something along the lines that each customer buys a few hundred dollars up front and re-orders $50 a month, blah blah blah….

So here’s another look at the cold hard facts. I looked at 9 units and areas. This is by no means a statistical sample. But I did choose areas and units that are known within Mary Kay as “really teaching selling.” The directors and nsd’s are held up as the ones who are teaching consultants to do it right and who focus on selling.

I looked at the orders their consultants placed with Mary Kay and have assumed (very generously) that the consultants are selling everything they’re ordering. We know that’s not the case, but let’s give them the benefit of the doubt anyway. I took their reported retail sales, assumed they sold it all at full retail, divided it out by month, and assumed 40% profit on the sales. And even though I generously assumed that the consultants on these lists were selling everything they ordered…. still they are not selling much.

Check it out below. What you’ll see is that out of these wonderful “selling” areas and units, not one person is making a living wage by selling products. The very top person is making less than $1,700 a month, if she sells all that she purchases, and if she sells it all at full retail price. That’s about $20,000 year from product sales at the most.

Of all these units and areas, only ONE has people in it that could theoretically “make a living” selling products. If she sells all products she orders, and at full retail, she might make about $36,000. That area is one of the largest areas in Mary Kay. The top 20 people in that area (with literally thousands of consultants) have a theoretical profit of $2,000 or more a month from product sales. That may be a living wage to some, but you see that everyone else from the other areas doesn’t come close to $2,000 per month. (And again, it’s only possible if they sell it all and they sell it all at full retail. If they discount, the profits are slashed. If they stock any of that as inventory, profits are slashed.)

So when I hear women bragging about how much product is sold by Mary Kay consultants, I really wonder what their idea of “lots of product” is. It’s sure not reflected here in these units and areas known for selling, selling, selling!!! 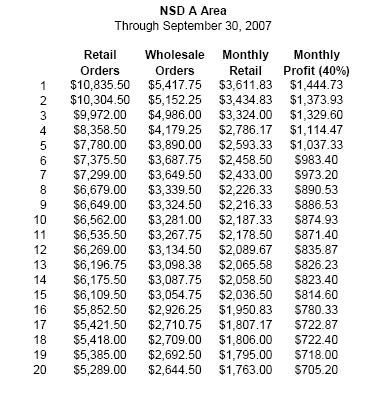