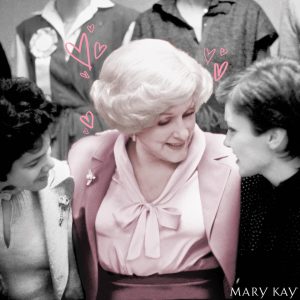 Mary Kay works when you do! No it doesn’t. There is a reason why sales directors earn so little. This story details the struggles of new sales director who quit after the debt and the fight became too much for her.

Early last year, Mia was flying high. She was a new sales director, in a brand new Mary Kay car, and feeling successful with commission checks between $1,000 and $2,500 per month. The sky was the limit! She would determine her own success based on how hard she was willing to work!

But the truth was that Mia was faking it till she made it.  Mia was exaggerating about how much money she was making, because she believed in talking about your goals and acting as if they were already done! (Sound familiar, anyone?)

Mia believed she was well on her way to Cadillac production and told everyone her unit was “on target”, when what she really meant was that she was hopeful that she could quickly build to pink Cadillac production levels. Again, she talked about it as if it was already done to help motivate and inspire everyone. (Common in Mary Kay, no?)

Over the last six months, the Mary Kay bubble popped for Mia. Her production was falling and no matter how hard she worked, things just weren’t happening for her. Mia’s husband was very worried about her, as she became unable to eat because of the stress. He didn’t tell her to quit Mary Kay. He believed she needed to make that decision all on her own.

Mia is now $5,000 in debt and calling it quits. She did have a nice car credit account built up right after she got her Mary kay car, and it has helped her through the last few months. But this is it. The credit is used up, and she does not want to continue on this path anymore. Mia put her heart and soul into Mary Kay, worked long hours, and never really saw a return on that effort. It finally became too much.

She is stepping down and has $7,000 wholesale inventory which she is trying hard to liquidate. Mia says she just doesn’t have the strength to convince women to work a marketing plan that does not work.

Ladies, I share Mia’s story with you to remind you how common this is. This story is not of one woman, one “bad apple,” who thought that MK was a get rich quick scheme or wasn’t willing to work hard. This is a woman who followed the plan for months, and was still losing money… even after moving up to the coveted “sales director” position which was supposed to be the ticket to making money. Yet she has continued to lose money month after month.

There are women like Mia who work hard, do all the right things, follow the plan, and still do not move up in Mary Kay. Is it the fault of the woman, or does it indicate a flawed plan? I’ve seen it happen too many times. The stories are all the same, and the problem is with the Mary Kay system.