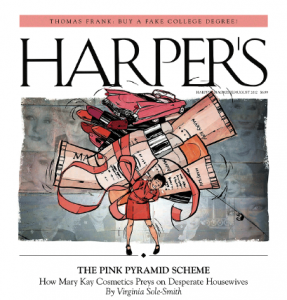 Let’s take a look back to the 2012 Harper’s Magazine cover story, The Pink Pyramid Scheme: How Mary Kay Cosmetics Preys on Desperate Housewives. Mary Kay Inc. immediately responded to the article, but with almost no substance. There have been two primary arguments corporate representatives use to “prove” that Mary Kay is not a pyramid scheme and is a real business opportunity (no, it’s not):

Mary Kay’s Laura Beitler proudly proclaimed, “The majority of the product ends up with end consumers.” Yet when pressed for details on actual retail sales of products, Beitler admitted that corporate does not track this. Thus, her statement that most product ends up with actual consumers is 100% fabricated.

When presented with the fact that more than 99% of people involved in multi-level marketing companies lose money, MLM lovers turn to a common defense… no one wants to make money. Laura Beitler’s response to the high failure rate included, “Different people start a Mary Kay business for different reasons. Some are looking for just a little income…a new career…social aspects.”

Virginia Sole-Smith, the author of the Harper’s cover story, showed what nonsense this is in a blog post she wrote as a follow up to her article.  The post [Inside the Pink Pyramid] Women Join Direct Sales For All Kinds of Reasons starts with a screenshot from Mary Kay Inc’s. website, clearly touting how LUCRATIVE Mary Kay is. 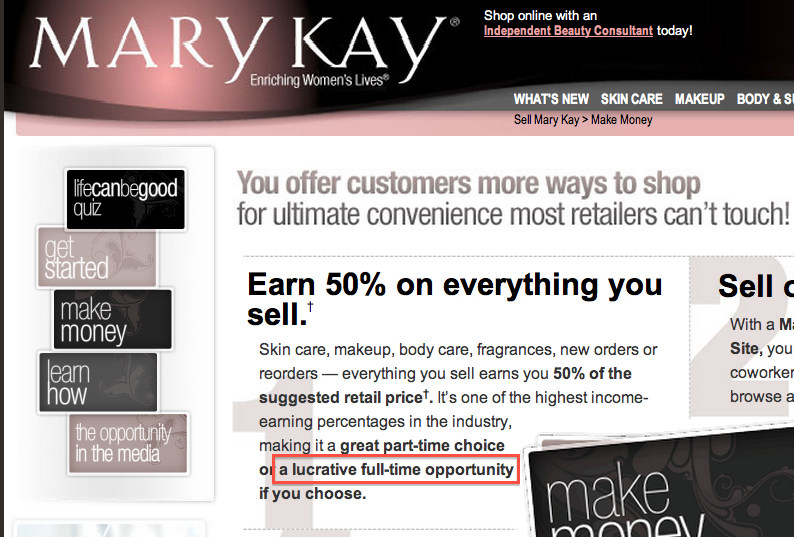 There are a couple of problems with this argument.

For starters, it’s a little too convenient for me. Mary Kay promises a “lucrative full-time opportunity,” (see that claim right there in a screenshot from their website, above, red circle mine). It puts out press releases billing itself as a job creator and the answer to our unemployment woes. In fact, it’s currently pursuing recent college grads, advertising its career potential to twenty-somethings saddled with student loans and facing down a tepid job market. But as soon as we start asking how much money you can really earn in Mary Kay, the tune changes. Now it’s oh don’t worry, most of these women aren’t relying on us for their income anyway. Really? In this terrible job market that you just told us about, with all their debt and unemployment issues?

And last, there’s the fact that almost everybody I interviewed told me that initially, they “just wanted to make a little extra money…” but once their recruiter started outlining all of the income potential before them, they wanted in, in a big way. Lynne thought it would be just a sideline — until her recruiter convinced her that she could replace her full-time income. Mary Kay knows women are coming in with this idea — but it wants to convert as many as possible to the career path, because those are the folks who buy the most product. Lane, writing over on Jezebel yesterday, was similarly skeptical until she heard her recruiter’s pitch:

I bought into the lure of easy money hook, line, and sinker. She told my coworker and me her own rags to riches tale, which included how she had kept her family afloat during her husband’s layoff. She talked about financial freedom, economic success, and then showed us her newly earned pink Cadillac. I was sold, and I was going to sell Mary Kay cosmetics to all my Goth and Grunge friends, and I was going to make a killing.

In fact, even if you make it clear that this is just going to be a hobby for you, a successful Mary Kay sales director will find ways to increase your inventory purchase.

If you’ve ever gotten a whiff of a Mary Kay recruiter, one of the first things you probably heard was one of these:

Indeed, all MLMs push the “income opportunity,” but when faced with the the fact that almost everyone loses money, they turn tail and say that no one wants to make money anyway.