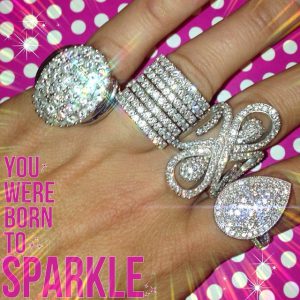 I was recruited into Mary Kay by a hard working supervisor from my job about one year after we stopped working with each other. She was someone I really trusted.

When I first attended a MK meeting, I was drawn in by “ Faith First, Family Second, Career Third.” I was making a career change so that I could be a stay at home mom. My sales director met with my husband and alarm bells were set off. Right from the start my sales director was all about the bling.

She bragged about her Pink car, the prizes she had received and that Mary Kay was giving her the opportunity to buy a huge new home. She also had a husband earning a significant amount. (I know now that HE was paying for her dream home.) She had a room filled with MK products but refused to trade products with us.

Right away my sales director convinced me that I had to go to Seminar. A few months later I traveled with many other women and headed for Seminar. When I arrived at Seminar we were in a huge hotel where I got to share a room with three other total strangers. I got up extra early each morning so I could quickly use the restroom and get dressed. I put my make up on in a public restroom down the hall so other women could get ready.

When I first arrived at the Seminar conference centre there were three MK cars in the lobby. That day was a blur of motivational talks by various directors. There also were vendors selling MK products, books etc. Another cash grab. We had to pay for everything including our meals. The MK way included a caste system whereby the ordinary consultants got the worst seating and food.

Everything the directors spoke about was vague and mysterious. I waited for someone to actually tell me just how you sold these products. I also waited for someone to actually teach me some real makeup techniques. Instead what I got were directors that boasted about having met Mary Kay Ash. They talked about the pink in her mansion. Two of them gloated over having purchased designer shoes that were close to one thousand dollars. I heard all about the diamonds, the trips, and the cars.

That evening hundreds of women crammed into a theatre where we waited for the directors and NSDs to show up. It seemed that once again the focus was on extraordinary wealth and profit. The whole event was set up to be like some kind of Academy Awards production. The vaunted NSDs were paraded on stage like they were celebrities. We were shown a short video about this year’s trip, diamond jewellery, gifts and cars. It seemed that the gospel of prosperity was being preached.

We then had all the accolades presented. There was a throne for the Queen of sales complete with a sash and presentation of flowers. There were new directors who were waltzed across the stage in their brand new director suits. There were newly minted Red Jackets paraded across the stage. We were all clapping, cheering and crying when we saw these hard working women being honored.

What a night. What an extravaganza. There was a lot of talk about dream trips, being independent and what a wonderful opportunity this MK dream was. There were NSDs who crowed about their $40,000 a month earnings. Naturally the NSDs that were talking were in the original founders Emeritus club. Once again I listened intently. I heard all about growth, cars, prizes, etc.

I also heard one NSD shouting across to others that her unit had done it the right way. It seemed that there was a huge concern that other directors and NSDs were finding ways to cheat their way to the top. I did not hear exactly how they had become NSDs.

Immediately after seminar a brand new director quit. I found that odd because she had been so enthusiastic about MK on our way to Seminar a few days before. Months later we drove in my director’s pink car to Career Conference. My NSD had set up some kind of motivational and self help forum. We were tasked with designing t-shirts for our team. There was the prerequisite “Pink Cadillac Song” and the “Hot Hot Hot” song and of course we bonded as women without the NSD being any part of this scenario. She set up an ice cream parlor. Our NSD was aloof and did not join us for many of the events.

We were asked to dress down in jeans and our t-shirt design. The NSD dressed up in an expensive dress. We were made to feel like the second class citizens that we were.

Our NSD spoke about how frustrating being in MK had been. She had built up and lost many units over the years. She spoke about the annoyance of having her pink car towed from the driveway. Eventually though her cold-hearted fixation on wealth prevailed. With direct help from Mary Kay Ash herself, this NSD was able to convince many women to join her unit. At this conference she spoke about making a million but essentially losing a million too before finally making it for real.

Once again everything was vague with regards to exactly how she made it to the level of NSD Emeritus.  There was a lot of hype and rah rah enthusiasm. Directors spoke about Mary Kay Ash as though she were some kind of saint. My directo spoke about how many directors visited MK’s home and debated whether or not she had gotten any plastic surgery including a facelift.

It felt like I was with a bunch of directors who had an exaggerated focus on wealth and social position. Slowly but surely the Bloom was off the rose. MK had lost its freshness or acceptability.

My NSD stood in front of the room and invited us to have our photo taken with her. She handed us tiny empty boxes which she pretended were somehow imbued with the power to be successful just like her. Anywhere else she would have been just an ordinary woman with a superiority complex. At this conference she pretended to be extra ordinary and superior to everyone in the room. A

ll the talk about MK being faith-based and training being free were exposed as nonsense. Every woman that attended this gloat fest paid for the entire extravaganza. Not too long afterwards I got quite sick and got absolutely no help from anyone within MK. A few months later I finally woke up and quit this controversial money pit for good.