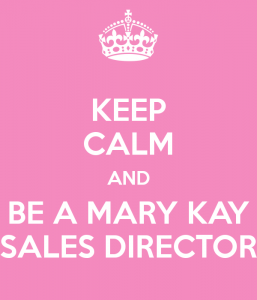 This is the story of a new director who felt a lack of support and training, and who was topping off production to meet the $4,500 wholesale minimum. Lest you should think that is unusual and not the “Mary Kay way” …. think again. Many, many directors buy production every other month.

I don’t even know where to start. I’m so confused! I have been reading everything on your site for about a week or so. I know it’s ALL true! And it’s helping me understand my time in MK.

I was asked to “step down” as a director after less than a year as a director. My unit couldn’t seem to make production every month. We would fall short and I would take care of it. I charged up all my credit cards and not because I have a “flawed personality”.

I did it because I Believed in the dream. If you can dream it, you can achieve it. Right? I thought my “love checks” would get bigger and it would all work out. The only thing I achieved is that I filed bankruptcy after I got out of MK.

I was so sad for many reasons. Not just because I had perfect credit a couple of years ago. There’s many other things that hurt me. During DIQ, I was working full time as a nurse and I always showed up to go up. I believed in my senior director too. She pushed and I was her first offspring. Debuted at my first seminar. During DIQ she told me I was on target for my car. They announced to everyone I was a free car driver.

I planned to take the cash compensation and work for the next car. My senior director and her senior direction put it on Facebook. Then when I went to DIT, I asked questions because I still hadn’t received any money for the car. I was informed that I had fallen off target and there was no car. I cried and cried and was upset with my senior. I didn’t get mine but me being in DIQ put her into her first pink Cadillac.

There I was,  a brand new director not feeling like I knew how to run a unit and my senior said it was time for me to fly on my own. My unit that really consisted of myself and 4 or 5 consultants had to leave her unit and go find our way. I stopped “feeling the love” Resentment started creeping in. I felt very used. I didn’t care for a lot of things she did.

I struggled since day one being a director. I felt there wasn’t the support I desperately needed. I had great sales and wanting to be successful, I would reinvest 100% back into my business. I started out with an emerald star order because my director said I needed it. I had tons of product on my shelves and several maxed out credit cards resulting in a lot of debt that ultimately ended with me in bankruptcy. I was past due on rent and other bills, and I’m a single mom!

Oh yeah! While I was in MK, I lost my J O B as a nurse guess why! I talked too much Mary Kay. I was so excited and I lived & breathed Mary Kay. I would invite to our weekly meetings, talk about that free car I was getting etc. With no job, I was encouraged to work Mary Kay full time. I gave it a try! Figured I could move on up that ladder a little faster. What a joke!

I received one commission check for $1,500. I was so excited & I knew that was just the beginning. That’s the highest I got. Sad huh?

Stepping down forced me to think about a lot of things and really take a good look at what’s going on in MK. That’s when I decided to come on this site. I was told to NEVER read this stuff because it was a lot of negative women that weren’t successful with their business. Yet, here I am! Wow!

Good news is, I’m working at my new job as a charge nurse and I love it. I thought I might want to continue to sell because I had at least $10,000 in product. Thankfully I was able to send a lot of it back and ran sales to get rid of the rest and recoup what I could. I was close to losing my sanity. I can’t put into words how stressful making production was and the fear of failure.