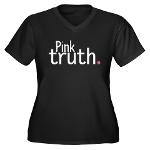 But it’s true. We’re still here talking about the exact same abuses of consultants. The exact same lies. The same way new recruits are frontloaded with large inventory packages. The same way directors put inventory orders on their credit cards in order to make minimum production or finish a goal, knowing full well that they don’t have the money to do so and they have almost no hope of selling those products.

We all know people (including ourselves) who hold to deep beliefs and are adamant about defending them, until they get new information. That’s how Pink Truth works. Women come here adamant to defend Mary Kay, shocked that young and old timers would band together and spill their guts about the inner workings and reality of the world of Mary Kay.

If you read Pink Truth for any length of time, the truth spoken here eventually becomes something you can no longer deny.

Some have asked us why don’t we just move on? Maybe it’s because Mary Kay is a very elaborate money scheme that preys on vulnerable women, leaves them broke, but is disguised as a life affirming “opportunity.”

Despite all our efforts, Mary Kay Inc. has not faced the truth. They have not come “clean.”

Over the last 14 years, the number of consultants and directors has dropped dramatically in the U.S. The company has made up for that with recruiting in huge markets like China. Mary Kay can continue on indefinitely, so long as their international markets continue to perform.

In the U.S., husbands are finding Pink Truth, new possible recruits are finding it, consultants are finding it, NSDs already read it (and warn about it), directors at both high and low ends are questioning the tactics they have used because they are now exposed here, and the company marches merrily along as if this downturn is only temporary. The United States downturn for Mary Kay could have been temporary. Maybe they could have stopped the the bleeding, by simply admitting past mistakes and confirming a commitment to change “the system.” Maybe Mary Kay could have consultants who are truly proud of the company’s integrity in which they once believed, and maybe they could grow again.

But Mary Kay cannot do that. And here is why.

The entire operation depends on NOT facing the truth.

How hard would it be? Devastatingly hard. The entire scam would crumble.

Instead of 400 women in the Court of Sales, you would have 50… maybe. Unit clubs would disintegrate. No million dollar units. No “top director trip” units. No massive recruiting events where 60 women sign up.

The truth would weed out the impulse recruits. The “real” earnings figures for Premier Club and Caddy directors would expose how little “executive” income is made.

Coming down the stairs being helped by tuxedoed gentlemen for creating five maxed credit cards would be a thing of the past. The illusion that anyone can do it would be gone.

The day Mary Kay faces the truth, will be a day of freedom for over 2 million consultants worldwide. It may take Seminar down a peg or two, to more like a local high school sports banquet… but the results would be real. And honorable. And right. And every woman involved could hold her head up and know she deserved her award.

And Mary Kay for the first time in decades, could claim in earnest that old motto… ”enriching women’s lives.” Up to now, knowing the fraud that goes on, and doing nothing to curtail it, and in fact doing every thing to encourage it, means the only “enriching” that Mary Kay Cosmetics actually cares about, is its own. That is the blind truth. We have been exposing this truth for years.

Unfortunately, it is the 2+ million consultants and directors worldwide who are blind as well.

And the sad reality is, that Mary Kay will not come clean, because the embarrassment is too much and their culpability is too great. They have presided over and looked the other way on, abuses of the sales force, at the hands of their own NSDs and unmonitored sales directors, because the money generated is just too great! They would be financially liable under any other “system” of employment for this massive fraud.

Hiding behind the safety fence of the independent contractor system, they march merrily along, baiting the new recruit with her “clock is ticking” on the $600 of free products if she orders an inventory package right away… knowing full well she is likely never to sell all of it, and will be tricked by her “warm market” initial sales to order more.

What happens when Mary Kay faces the truth? The same thing that happens to us: humiliation, shame, embarrassment. Disbelief that we could have go on so long in utter denial. Watching our financial house of cards crumble, and having to stuff that truth down and suck others in, just to maintain. Trapped. Needing the money, and unwilling to face what we have become. Which is exactly what Mary Kay is doing in overseas… just “moving on.”

For Mary Kay Cosmetics, the truth is apparently impossible. It would require a level of integrity that risks financial fallout, and a length of time “healing” that is both uncomfortable and time consuming. They must “move on” and replace that production over and over with new recruits and new inventory packages, without taking the time to create a more noble Mary Kay. The company stays in denial because they don’t want to look at the truth. Mary Kay Inc. will not process these words, nor face that the truth, while painful, really does set you free.