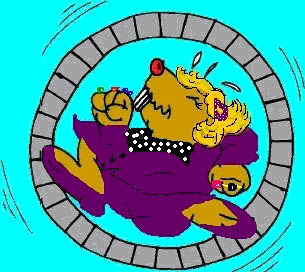 A little humor about the life of a Mary Kay sales director, perpetually running on a hamster wheel.

This specimen is truly representational of the fiercest of the species, having run hard and fast enough to capture five rings, which the hamsterous is known to flash among the pack, as a sign of superiority.

This hamsterous must be a pack leader as evidenced by the tell tale spotted throat and the constricting pumps which can no longer be removed from her swollen feet.

Each year the hamsterous sheds its skin and emerges in July with a new shiny coat, and this year is no exception. However, the Purple Hamsterous polkadotis is a disappointment to most naturalists as its coloring clashes with most environments in which it is found.

The hamsterous spends it days devouring plastic and is known to be able to sniff it out at 50 feet. Scientists suggest that when coming upon the hamsterous polkadotis in the wild, it is best to utter these words, “I already have a consultant” so as to deflect the beast from stealing your identity or your wallet. During its rabid period, which falls on the last two days of every month, the hamsterous takes on chameleon-like properties, and can appear to be your best friend. Having whitened strong and long teeth, a motivated hamsterous can rip through multiple cardboard boxes in a matter of minutes.

Known as a clever and cunning migratory rodent, the hamsterous polkadotis will forage for gerbil, mice and other small woodland creatures to add to its pack and train to run the wheel. Scientists have also observed the hamsterous polkadotis welcoming the brown gold-spangled rat into its turf. In these rare events, the brown spangled rat dances and struts while the hamsterous has been actually seen to smile and nod. This dance mesmerizes all woodland creatures in view to follow, unquestioningly, the hamsterous as she heads toward the wheel. This behavior has baffled naturalists for over 40 years as it resumes its run on the wheel, tracking lesser species and living off nail glue and pantyhose.

Scientists suggest that the hamsterous runs the wheel day in and day out simply because it is utterly blind and is convinced it is going somewhere, as our specimen today shows. The hamsterous polkadotis has only been known to open its eyes when stumbling into the den of the pinkus veritatis, in whose presence, the hamsterous reluctantly opens its eyes, gets off the wheel and begins to once again, breath deep the fresh air.

Let’s attempt to quietly back away now and hope we remain unsee….

“ WOW! You sure are sharp! Have you ever been a face model?”