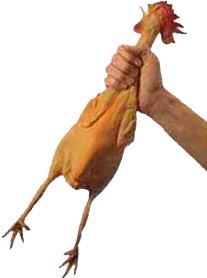 Have you ever had to cough up coin for being contradictive in Mary Kay? Ever been stuck with the duck? Ever hear about the frustrated director who screamed at a unit meeting, “Punks hold skunks!”

The last one was made-up, of course, but it’s probably not that far off of the mark, particularly when we’ve got NSD Rena Tarbet telling new consultants, “Your attitude MUST always be positive! One of the reasons you can be terminated as a Consultant is for NEGATIVISM.”

I was surprised to discover that “negativism” is an actual word. The American Heritage Dictionary defines it as, “A habitual attitude of skepticism or resistance to the suggestions/instructions of others.” Simplified, it becomes “The act of regularly refusing to take things at face value.”

Question One: Can we all agree that motivational and self-help books get a big pink stamp of approval in MK? Joel Olsteen fans, you keep hooting like that and the Audubon Society’s going to think that the local Spotted Owl population’s breeding early this year.

Now let me ask you this: Would it be an accurate to describe the Bible as a motivational/self-help book? After all, its verses are widely quoted in director and NSD e-mails, teachings, and speeches. It’s also a major element of life-changing programs such as Alcoholics Anonymous and life rehabilitation classes at homeless shelters – I’d say those uses fall under the “motivational/self-help” benchmarks, wouldn’t you?

Last question: What would you say if I told you that the Bible violently hurls the MK “no negativity” mindset to the mat and comes down on it with The People’s Elbow? Can I show you that the Bible gives everyone (including IBCs!) full permission to “regularly refuse to take things at face value?” If you find yourself saying “NO!” right now, that’s okay – that only means you don’t have enough information. Secure those loose articles and raise your arms because the lap bar’s on its way down!

The first part of Isaiah 1:18 says “Come, let us reason together…”

“Reason” here is defined as “to show to be right or to prove.” That’s pretty different thinking from that of a culture that makes a woman hold a stuffed skunk because she said something “negative,” like voicing the reality of her profits or lamenting the backache that comes with constantly schlepping an ulterior motive. (Note that our beloved Tracy was made to hold the skunk at more than one unit meeting in her Mary Kay days!)

What about Luke 14:28, which says, “For which of you, intending to build a tower, sitteth not down first, and counteth the cost, whether he has sufficient to finish it?”

That’s quite different from the objection overcomer of, “A sharp, intelligent person like yourself can make a decision when she knows the most information about it – that time is now.” And women receive little time to “count the cost,” especially when a recruiter’s pushing to get a signed Agreement within 24-48 hours.

Check out Proverbs 14:15: “The simple believeth every word: but the prudent man looketh well to his going.”

This verse smashes “Just Bee-lieve!” teachings that crow, “You can trust this company…you will never find a company as good as this one! We have the best opportunity in all the land.” (NSD Anita Garrett-Roe). Are you so simple that you tend to bee-lieve every word?

Last one, folks – this one come to us out of Acts 17:11: (NIV) “Now the Bereans were of more noble character than the Thessalonians, for they received the message with great eagerness and examined the Scriptures every day to see if what Paul said was true.”

Want to know something nifty? The Bereans had “great eagerness.” Translation? Bee-lief and plenty of it, but they didn’t stop there. They took it one step further by digging deeper and cross-checking what Paul preached against the Word.

Why would they do that? Were the Bereans just being Negative Nellies? Ater all, Paul wasn’t an uneducated hack; he studied under Rabban Gamaliel, a “Pharisee and doctor of the law.” According to JewishEncyclopedia.com, the title “Rabban” was higher than that of “Rabbi” and was given only to “presidents of the highest religious council.” Paul’s accomplishments, education, travels, and trials made him a prime candidate for receiving blind faith and unquestioning devotion, but the Bereans weren’t that gullible.

You don’t have to be, either, friend. In fact, you’d be doing yourself a great justice to give Proverbs 19:2 (NIV) a home on your goal poster, screen saver, or bathroom mirror: “It is not good to have zeal without knowledge.”

And we’re not talking about in-house knowledge that paints MK as nothing less than infallible – you get enough of that already. Dare to step out, take hard looks, and ask hard questions. Besides, if the Bible says it’s okay, then who is your Director or NSD to tell you otherwise?

In the future, if you end up having to hold the rubber chicken at your unit meeting, take comfort in the fact that it’s not because you were being “negative” (unless you happened to be channeling Deadwood’s Al Swearengen while “discussing” things with your NSD) – you were simply refusing to take something at face value. And like the inquisitive Bereans, that makes you “of more noble character!”

Now that’s what I call positive!