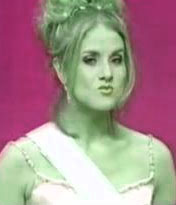 Back about 90 years ago, I worked in our church’s nursery.  On this particular day, my three-year old daughter and her playmates were playing the classic toddler game, You Scream and Run Like Hell and I’ll Try to Catch You While I’m Laughing My Can Off.  I was changing an infant’s diaper when my daughter raced past me, made the off-comment of, “It’s hot in here,” and continued onward.  I finished cleaning/dressing my young client, turned, and gasped as I witnessed my little girl running and laughing with her friends.  Stark naked.  Hey, Mom, I told you it was hot in here, remember? Find a way, make a way!

Aside from the fact that I can now tease my daughter about having lived out the American Dream by running through a church au naturale, her situation made for one nifty object lesson:  the Mary Kay guidance of “Find a way, make a way” does not mean that the right thing will always be done.  I want to highlight one NSD who is teaching Mary Kay consultants how to lie; an act I would definitely file in the “Doing Whatever It Takes” drawer.

At NSD Gillian Ortega’s 2009 Fall Advance, NSD Dacia Wiegandt was featured as the guest speaker.  Amidst cheers and applause, Wiegandt took the microphone with a broad grin while someone off-screen cranked up the boom box.  “It’s the God in me…” the music crooned.  “It’s the God in meeee!”  The churchlike atmosphere continued as Wiegandt name-dropped God throughout her speech.  She praised Him as being the #1 presence in her life when she was striving to meet her National-in-Qualification quotas and claims that she surrendered her business to Him, praying, “Enlarge my territories, God”…I’m going to do the work, I know you’re going to bless it.”  That being said, it’s easy to understand why I’d do a catfish-mouthed double-take after hearing NSD Wiegandt explain her plan for getting customers into recruiting interviews:

“I would love to share with you a little bit more about this opportunity because I believe that this is the best unkept secret…if she says to me, “Well, I’ve actually gotta go because I gotta pick up my child,” what am I going to do?  I’m going to leave something out of her product.  So I have a reason to get back with her within 24 hours.  Y’all have to think quick, y’all have to think on your toes.  So how does tomorrow sound?  I have that Miracle Set, but I don’t have the foundation (hint hint, right?) So tomorrow, I’m going to have lunch with you, bring the foundation, and then I’m going to market her right there and share the opportunity.”

Shocked?  I was too.  I knew Wiegandt’s teaching had to be one of the tallest trees in Big Fat Fib Forest, but I wondered if other Mary Kay National Sales Directors would feel the same way.  Anxious to get other viewpoints, I posted Wiegandt’s teaching on ten NSD Facebook walls (to include Wiegandt’s), along with this introductory phrase:

“I need opinions from everyone on something another NSD teaches.  I was watching a video of NSD Dacia Wiegandt speaking at a Fall Advance, and in the video Dacia is telling the consultants that it’s okay to lie to a potential recruit to get her into a recruiting interview…you guys tell me if godly consultants should be doing this.”

Note that absolutely no reference to Pink Truth was made in each case to avoid a potential knee-jerk/spontaneous human reaction.  Human ash is the dickens to get out of a shag carpet, and don’t ask me how I know this.  Would these Mary Kay leaders address NSD Wiegandt’s teaching like true leaders or shriek “Shun the unbeliever! Shuuuun!”  Here are my findings.

To no one’s surprise, NSD Wiegandt rushed to delete her words and pound the “Block” button until her laptop screen cracked, but not before one of her acolytes rushed to her rescue:  “Have some class!  No one cares that you have such negative thoughts about Dacia.  Focus on edifying others, not trying to break them down.  This post shows your immaturity and envy of her success.”

Fun Fact:  Leaders who shamelessly teach women how to lie are not to be edified for doing so.  Also, success acquired through fraud is not worthy of envy.  Pity, perhaps, but not envy.  Next!

The second NSD to play the Delete-and-Block Card was NSD Gloria Mayfield-Banks.  Despite this, I’m proud to see that that at least one consultant in the Magic Area refused to agree with NSD Wiegandt’s trickery.  The consultant wrote:  “There is never an excuse to lie!  How can God honor our efforts and our business if we sin against HIM while doing it?  If we teach other consultants to deceive (to get the job done) how can they trust us to be honest with them in all things?”

This consultant’s post was deleted, so what does that say about NSD Mayfield-Banks?  To me, it says that placing all those orders to be a “Super Duper Magical Advance Winner” and “earning your ribbons to the floor” is much more important than identifying a spiritually-damaging teaching and advising one’s National Area to avoid it like the plague.

Other NSDs who deleted Wiegandt’s teaching from their Facebook pages include NSD Gillian Ortega, NSD Linda Toupin, NSD Robin Rowland, NSD Caterina Harris, NSD Tammy Crayk, and NSD Kathy Helou.   In addition, I posted the quote on Senior Sales Director Jordan Helou’s wall, only to receive the same delete-and-block treatment.  Her actions surprised me because I’d have thought that Jordan, who is quite vocal about her faith, would have stepped up to the plate and been just as vocal towards someone who was openly encouraging women to sin.  I did offer Jordan the chance to explain her position via e-mail, but she has refused to respond.

All’s well that ends well:  Two NSDs let NSD Wiegandt’s quote stay; NSD Janet Tade and NSD Rena Tarbet.  These Mary Kay leaders get credit where it’s due because they were the only two who didn’t try to defend Wiegandt’s lies or pretend they never existed.  I am also pleased to say that after an extensive online search of the Ortega Fall Advance video, I was met with either broken links or notifications that the video had been removed.  Isn’t it great to see that Mary Kay culture just got a little more honest?

Some gentle guidance for all the IBCs and Sales Directors reading today:  The next time you’re facing a goal and you’re advised to “Find a way, make a way,” ask yourself this:  “If the Associated Press released an article describing the ways I “found and made” in my Mary Kay business, would I be completely covered?  Or would my practices – like NSD Dacia Wiegandt’s – end up being exposed for the blasphemous blarney that they are?”

Don’t do what your NSD says, my friends.  Do what is right.