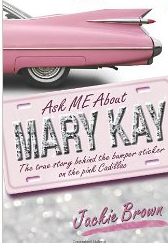 Last year a book was released titled Ask ME About MARY KAY: The true story behind the bumper sticker on the pink Cadillac

Jackie Brown is one of the original consultants who worked under Mary Kay herself. The gist of the book is the telling of her story, her interactions with MK, and the eventual splitting from Mary Kay Cosmetics to form BeautiControl. While I am in no way promoting Brown’s MLM by mentioning her work, the information Brown reveals about the Mary Kay World in Ask ME About Mary Kay is both interesting, jaw-dropping, and will confirm many suspicious about the reality behind the director’s suit.

In one story, Brown tells of a conversation she had with Ash regarding Brown’s pregnancy and the concern that the health of Brown’s baby was at risk.

“…I think that staying busy is the best thing for you. It is certainly best for your salespeople.” Then [Mary Kay] added her final shot. “If you take time off, Dalene will gain on you.”

Best for you, best for the salespeople, but Mary Kay appears not to care what’s best for the baby. Brown briefly discusses how she wasn’t surprised that Mary Kay was trying to play on Brown’s competitive spirit – apparently, it was a common tactic of MK’s – before continuing with the conversation, even to the point of asking her what kind of mink she’d like to have.

The next part of the conversation with Mary Kay confirms that the motto “God First, Family second, Career third” is just a pretty-sounding phrase with no truth to it, and it’s been that way from the very beginning.

“Before you go,” Mary Kay added quickly, “you should be considering what you need to do, if the baby does live…you will have to hire a full-time nanny. Your sales organization is so large that you need to give it your full-time attention.”

NICE. Dripping with compassion, says I! It’s no wonder that a few sentences later, Brown muses:

“Whatever happened,” I muttered to myself, “to the idea that I was an independent business person and could make my own decisions and set my own hours?”

Later in the book, Brown shares her thoughts on directorship and how it’s quite far from the glorious lifestyle it’s presented as:

“If I gave up my personal unit, it appeared that I wouldn’t be spread so thin. Truthfully, what I really wanted was to be at home al lot more with my children, and the idea of a simple eight-hour-a-day job sounded better all the time. The gold had lost a great deal of its glitter, and I was no longer willing to give my whole life to Mary kay Cosmetics.”

And finally, Brown offers some thought-provoking insight on the Mary Kay Husband Issue, per a conversation with Dathene Dark, the granddaughter of the infamous hide tanner. Dathene was in possession of several documents bearing a petition’s worth of last names courtesy of you-know-who:

“Dathene pulled out papers for us to see. One was signed with the last name of Eckman, another was Miller, and still another one was Louis. Speechless, Marjie and I just looked at each other. “And,” Dathene added, now excited, “[Mary Kay] married Mary Crowley’s brother, whose name was Weaver, twice…so we started counting: Rogers (the children’s father), Louis, Miller, Eckman, Weaver, Weaver, Hallenbeck, and Ash.”

Lazy, if Brown’s account is true, she mentioned all the husbands you tracked down for your “Missing Marriages” piece – way to go! I wonder where the other two (plus the second marriage to Weaver) fit on that timeline? Good grief.

The question was posed, “Did Mary Kay really only have 5,000 dollars to start Mary Kay after all those Marriages? You know she negotiated settlements for herself!”

The claim that MK used 5k of her own money to start MK is false. Ash explicitly states in Miracles Happen that her son Ben had given her his life savings of $4500. But Ben gets zero credit/mention in every last recruiting document I’ve seen.

I tell you what, PT community, it’s going to be pretty darned hard for the drones to claim Brown is bitter because she didn’t work her business hard enough; according to the book, Brown was no slouch. She was one of the Top Ten in Sales. One monthly director check Brown cited was 3k, and this was back in the 60s.

Another great insight: Go to pages 150-152 on the electronic copy and read about Mary Kay’s plan to lie and say Brown’s and Dalene’s units were at a tie, even though Dalene’s numbers weren’t even close to Brown’s. Apparently, Dalene had told MK that if she wasn’t recognized more, she’d quit the business.

And then there’s the part on page 241 where Brown gives MK her resignation. MK asks to attend Brown’s Beauticontrol marketing plan meeting that night. Brown tells MK that she can come (a decision she’d regret later), but she cannot say a word. As Brown leaves, MK makes the smart a$$ comment of “Jackie, even with Jesus, there was Judas.”

So MK attends the meeting, Brown later leaves the room, only to return and discover MK sabotaging the potentials. Brown writes that MK was “flitting from director to director” and whispering “Don’t forget, after she’s gone you’re going to get a share of all that money she’s been making each month.”

How very Go-Get of her.