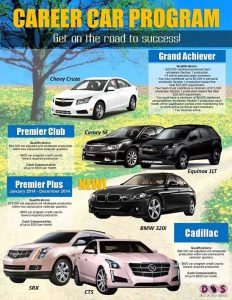 What can we learn about the strength of Mary Kay’s business in the United States? The company stopped telling us how many consultants they had in the U.S. around 2008, when they reported 600,000. Since then, they’ve only reported the number of consultants worldwide. At the same time, they reported about 13,000 sales directors.

A big deal is made out of the “Career Car Program” because it’s a huge marketing tool for Mary Kay. It essentially costs the company nothing, because the production requirements ensure that the cars are paid for. Yet by putting the MK name on cars and driving them around, they create buzz, especially with the Cadillacs. Mary Kay even gives sales directors a standard press release to send out when they get their pink Cadillac.

So how many cars does Mary Kay have on the road? Far less than the number of sales directors.

I think it’s fair to assume that there are about 11,000 to 12,000 sales directors. Maybe less, but who knows. And less than half of the sales directors are in MK cars if there are 5,000 of them on the road. (And the 5,000 cars on the road include consultants who are car drivers.) Sales director production to get into a car is $7,000 per month, so it’s no surprise that so many of them aren’t in a MK car.