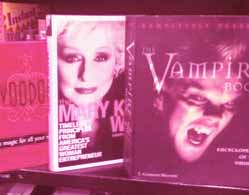 It didn’t take long for the comments section of the Hungry for Answers: One Mary Kay Consultant’s Journey video to fire up shortly after having sent my explanatory e-mail to “Vince.”  The excitement began when “Vince” remarked on my having used the names of three NSDs (one of which being that of NSD Gillian Ortega’s) as search keywords for the video.

Note:  “V” represents “Vince’s” comments, while “S” marks my own.   As you read, see if you can find any of the following tucked within my friend’s replies:  Mary Kay catchphrases, blanket statements, a continuous avoidance of discussing big-ticket issues such as inventory, and the repeated promise to intercede for my filthy, Mary Kay-theistic soul before God and all of Heaven.   Okay, “Vince”, take it away!

V:  Its very interesting to me that you would involve my Mom and our other top national friends in your keywords when your showing Mary Kay in the most unjust and incorrect way possible.   Just because you didn’t have the motivation and drive to succeed in the business you bash it.   People are lazy and if you spent half the time it took you to create this video on your Mary Kay business you’d be successful.

S: Telling the truth about the manipulative recruiting practices being taught by Mary Kay leaders like your mother is unjust and incorrect? How so?  In other news, I’ve never been in Mary Kay. So there goes your canned “You just didn’t work your business” defense right out the window.

V: Use your life for something that actually matters…not to show people that their lazy ways were ok when they started this business and couldnt get it going….mary kay never said it was a get rich quick scheme she said it took hard work and dedication to be at the top…

S:  Yes, when one is on the Mary Kay career path, it takes the hard work of repeatedly manipulating women to get them to say “yes,” followed by manipulating them into ordering big inventories. I can cite several NSD quotes which encourage MK recruiters to push the 3600 inventory level (NSD Pam Shaw, NSD Mary Pat Raynor) or to only talk about the top three levels of inventory in recruiting interviews (NSD Stacy James).  Are these NSDs correct? And if not, does your mother teach otherwise?

V: There is a reason mary kay is a 4 billion dollar company, and thats because of the faith, family, career principles and the amazing product that the company produces.

S:  Please don’t bring God and faith into this, as Mary Kay is as far from putting “God First” as the east is from the west. God was no fan of manipulation and half-truths, both of which are highly prominent facets of the Mary Kay recruiting game. God wasn’t cool with manipulation when Jezebel pulled it, and he didn’t grin at Ananias and Sapphira’s hijinks. So what makes you think God’s winking each time one of your leaders decides to explain only the bigger inventory levels?

V: Gillian Cares about this business and would do nothing to hurt anyone…She came to America with 20 dollars in her pocket.  She has since changed thousands of Ladies lives around the world with the Mary Kay opportunity…She is top .0002 in the business and I understand your jealousy because your probably a lazy person that doesnt want to work as hard as her…I encourage you to call me XXXX but i know u wont because your hiding behind ur youtube name…i am praying for you!

After I deleted “Vince’s” post because it contained his phone number, I replied with:

S: Posting personal phone numbers is not smart.  And here’s a tiny thought: Ever consider that women can use their God-given talents and do it WITHOUT Mary Kay?  Radical concept, I know.

V:  Your not using any God given talents posting negative videos like this…so for that i know your not using your God Givin talents ….The Devil is obvoiusly using you..and ur not close enough to God to push him away….Your video wasts your time and My time and for this I am done with you..once again i am praying for you

S: How is this video negative? It depicts the very reality that leaders like your mother work so hard to stifle: the chargebacks, the suppression of any thought that doesn’t glorify Mary Kay, and the recommendation that one attend Seminar as a cure-all doubt-snuffer. You still haven’t told me where you stand on the God issue (except that you’re praying that I will fall on the pink altar and confess my many sins before Mary Kay Ash and the mighty NSDs).  If God is against manipulation and half-truths, do you think He smiles when your leaders push the bigger inventories or use manipulation in their recruiting interviews?  Are you going to answer me straight, or are YOU scared that such thinking might get you labelled as “negative?”

I’ll also wager that there’s few women who do not enter an MK business with a serious mindset. A higher inventory is a poor yardstick for measuring “seriousness.” Even Corporate agrees with me:

“If you plan to build your business gradually…then choosing to place a $600 wholesale order probably will suffice.” (Inventory Answers, Applause May 2007)  If Corporate says $600 is plenty, where do the NSDs get off pushing the higher amounts? Who is correct?

I wasn’t letting “Vince” get off without addressing the inventory issue.  I’d mentioned inventory twice and only received unhelpful, fluffy catchphrases.  By the third time, however, “Vince” finally cracked:

V: They push big inventories because that shows your serious about the business and the company gives you more bang for your buck…even at 3600 thats not even close to what it would be to start your own business…so “pushing 3600 is not really pushing anything its like pushing an ant compared to pushing a 1 ton bolder…so your point is not valid…and I am waiting for my call or are you scared?

“Vince” went on to later delete this comment, which is a shame because it shines a big ol’ floodlight on the reality of inventory.  “Vince” admits that Mary Kay leaders “push big inventories” and that 3600 on shelf is a drop in the bucket compared to say, the amount it would cost to start a business where you have the freedom to advertise and sell a product as you please.  I’m thinking he may have deleted it because Mommy NSD took one look at the “They push big inventories because…” line and promptly had back-to-back panic attacks.  Cancel, cancel, cancel; we can’t let potential prospects get wise to the ever-present Mary Kay ulterior motive, now, can we?

I replied to the incredibly sophomoric “You’re scared!” taunt with this:

S: I don’t have to prove myself to you, kiddo. While your emotionally manipulative lingo might work on a potential prospect, it ain’t happening here. 2/10 for effort.  It is no secret that the biggest production comes from new recruits; women who know jack about the business and can be easily “guided” into big orders. And those up the chain (like your NSD mom) stand to greatly benefit, as bigger orders mean bigger production and commission checks.

At this point, the reply came from a different screen name, (and one with “Jesus” in it to boot) but it’s clearly the same gentleman.  And apparently he’s just realized that I was never in Mary Kay!  Like so many of the Mary Kay drones that start out discussions sounding condescendingly goody-two-shoes, this individual’s pink veil was quickly rent from top to bottom with this explosive comment:

V:  TScribbler you have officially taken yourself out of explaining anything to me or anyone else in the world about this business. You havent even tried it and you bash it. HA WHAT A WASTE OF TIME AND ENERGY WHEN YOU COULD BE OUT CHANGING LIVES! O WAIT? YOU ARE LAZY APPARENTLY AND YOU DONT WANT TO USE YOUR GOD GIVIN TALENTS BECAUSE YOU ARE OF THIS WORLD. AND FOR THIS I AM PRAYING FOR YOU!

Boy, if that last shot of Go-Give didn’t make me want to grab a Beauty Consultant Agreement, fall upon my knees, and engage in self-flagellation while weeping and wailing for Mary Kay Ash to intercede before Christ on my behalf, nothing will.

I haven’t heard from “Vince” since then and don’t expect to.  I do wonder one thing, though.  Often MK leaders will gush about how they’ve learned so much in Mary Kay and are passing those things down to their children.  Going by this example, I can’t help but wonder if those things include replying to any challenge to Mary Kay with a knee-jerk response of “You were lazy and didn’t work it hard enough” and a glare-down-the-nose “God is on my side and not yours, you baleful disciple of Lucifer” condescension of anyone who doesn’t embrace the Mary Kay gospel.  Frankly, I’ll stick with teaching my daughter how to thoroughly research and critically analyze inflated claims and to call out anyone/anything who has the pomposity to reduce Jesus Christ to a cheap selling point.  Oh yes, and to buy her makeup pressure-free from Sephora or any other cosmetic entity that doesn’t claim “Best Selling Brand!” while failing to mention that their own consultants are the ones doing the lion’s share of the buying.

“Vince,” ol’ buddy, if you are indeed who you claim to be, I hope that you see the reality of what your NSD mother does for a living sooner than later.  And for this, I am praying for you.