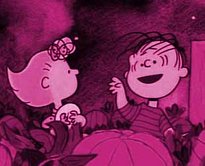 As far as I’m concerned, it’s not Halloween until I’ve watched It’s the Great Pumpkin, Charlie Brown! at least once.  Back in my tender grade school years, I can remember the giddiness I felt when the local TV station teased me with commercial after commercial, my heart leaping each time the screen faded to black – would they show the multicolored “SPECIAL PRESENTATION” screen that heralded the once-a-year, 23-minute Snoopy-worship session?  Or would it be yet another advertisement for Craftsman tools?  TVs that antagonize children like that get reincarnated as ugly abstract art on some aging hipster’s lawn – I think that’s in the Bible somewhere between Jude and the maps of Israel, but I could be wrong.

If you haven’t watched this Peanuts classic in a while, tip your hat to technology and give it a view on YouTube.  This time, however, try watching it with your Mary Kay experiences in mind.  Be you an IBC or director, active or former, I’m confident that you will see frighteningly accurate similarities between the Mary Kay world and this simple Halloween cartoon.

For me, the biggest parallel I drew was between women on the Mary Kay career path (especially directors and above) and Linus.  Linus is absolutely relentless in his belief of the Great Pumpkin and the riches he brings.  Linus has never seen those riches, but that doesn’t stop him from telling anyone and everyone within three feet what he knows (or has been told) about the giant gourd.   It’s a simple gospel that can fit into anyone’s life:  The Great Pumpkin rises out of the pumpkin patch he deems is the “most sincere,” shuns unbelieving kids, and gives toys to the faithful ones.  There’s a catch, though; no matter how sincere or faithful you are, if you falter in your belief, the Great Pumpkin will drop you like a flaming marshmallow.  Clearly, he’s not down with negativity.

Charlie Brown’s little sister Sally represents women in two stages, the first of which is prospect-turned-trusting recruit.  Bright-eyed and bubby, Sally can’t wait to experience trick-or-treating.  Sally looks up to Linus, so it’s not surprising when – after Linus tells her about the many blessings of the Great Pumpkin and offers her the opportunity to witness the Great Pumpkin’s appearance – Sally agrees.  Interestingly enough, when Sally questions Linus about the Great Pumpkin, Linus retorts with the uncharacteristically manipulative, “I thought little girls always believed everything that was told to them; I thought little girls were always innocent and trusting.”  Linus’s recruiting tactic is successful, and Sally decides not to go trick-or-treating with her friends.  She will come to regret her choice later, even though some will argue that no one held a gun to her head.

Once Sally’s hooked, Linus continues to keep her interest and emotions high with the promise, “You’ll see the Great Pumpkin with your own eyes!”  Moments later, we get an insightful peek at what Linus is really thinking:   “He’s got to pick this [pumpkin patch]; he’s got to!”  Poor Linus is selling Sally on something he hasn’t seen himself, nor is completely sure about.  Yet he dare not voice his concerns, as you’ll see later.

Suddenly, there’s a rustling in the leaves!  A figure rises above the vines and Sally is now nose-to-nose – not with the Great Pumpkin – but with Snoopy.  It is this brief brush with reality that transforms Sally from trusting recruit to educated seeker.  And there is backlash, dear readers.  Sally flickers through the emotions of rage, regret, and frustration as she realizes that she’s not only been played, but is paying the high price that comes with making choices based on emotionally-charged (and scant) information:  “Halloween is over and I’ve missed it…I could have had candy apples and gum; and cookies and money and all sorts of things!  But no!  I had to listen to you, you blockhead!  What a fool I was!”

To Mary Kay culture, Sally’s choice to leave the patch must seem quite negative.  After she decides that the pumpkin patch isn’t for her, Linus offers the self-righteous-sounding, “If the Great Pumpkin comes, I’ll still put in a good word for you!” before his expression turns to one of sheer fear.  “Good grief, I said “if!”  I meant, “When he comes!”  I’m doomed; one little slip like that can cause the Great Pumpkin to pass you by.”  I can’t help but feel a little sorry for Linus.  How can he pour so much work, time, and faith into something that is so quick to shun him the moment he expresses his true concerns?  “Oh, Great Pumpkin, where are you?”

Active directors and career-path consultants, maybe you see a bit of Linus in you today.  You’re doing the work of sitting in the pumpkin patch and waiting for the Great Pumpkin to appear.  You have the faith that so many of your mentors proclaim is necessary for success.  And you possess a sincerity that is unmatched by your peers.  Why, then, does the Great Pumpkin continue to elude you?  Is it because you’re not sincere enough?  Is it because you didn’t share him with enough people?  Maybe you’re struggling with the haunting notion that the second you express your true concerns with a sister consultant or a friend, the Great Pumpkin will pass you by.

If you’re doing the same things year after year above and beyond the call of Mary Kay duty, and it feels like you’re tossing your Halloween candy into a bag with no bottom, is it possible that it’s time to hitch your wagon to a star like Sally and leave the pumpkin patch altogether?  Or is it possible that all you need to do is book some more, recruit some more, order some more, listen to more NSD CDs, go to more Mary Kay events, and repeat to the mirror 20 times every morning,  “Just wait until next year…I’ll find a pumpkin patch that is REAL sincere!”

There are many fulfilling life paths and opportunities waiting outside of Mary Kay’s pumpkin patch, my friends.  Perhaps the time has come to explore yours.