In 2005, Mary Kay Cosmetics sales director Auri Hatheway had the #25 Unit in the Emerald Seminar. By Seminar 2006, she was #1 with over one million dollars in retail sales (well, really orders, but you get the idea). So how do you acquire such a lofty goal when we know for a fact that the market is saturated and no one is actually selling the product? You sell the opportunity… the dream!

Million dollar directors don’t climb that fast and make that much production by having a “selling” team … you become a Master Recruiter. You learn how to “close the sale” on the dream and frontload your recruit with a big fat Star Order.

The proof is in the numbers, right? And since Mary Kay is a “numbers game” let’s play! Here are some stats on Auri’s Million Dollar Busy Bees:

In the 4th quarter of 2006, Auri had 43 star consultants (as of May 30); 37 of them were new recruits! Here’s what frontloading looks like when you play the numbers game: 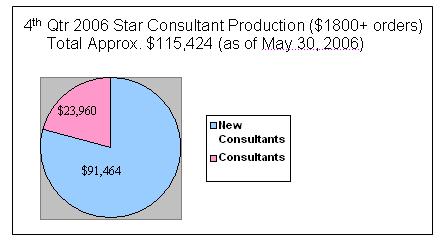 You start getting the picture that the key is in orders from new consultants, right?

Now you might hear some say that there is nothing wrong with helping women acquire inventory in order to be “serious” about their business. With this in mind, I decided to see how many of the NEW star consultants in the 4th quarter of 2006, continued to be stars in the first and second quarters of Mary Kay’s 2007 seminar year, and here’s what I found:

Out of 35 new consultants who came in as Star consultants ($1800+) at the end of May – 2 were stars in the 1st quarter. As of the end of October, only 4 of the original 4th quarter star consultants ordered $400 or more. Let’s face it, re-orders mean nothing in terms of selling because these statistics are based solely on wholesale orders to the company … whether any sales took place is a mystery.

Directors do NOT get into or out of N.I.Q. (National in Qualification) by teaching women to sell the product. They have to recruit a certain number of star consultants each quarter to make their quota … yes, there are quotas in Mary Kay. They know just how many warm bodies they need for their red jackets/senior consultants to bring into the meetings for them to be able to “close” them for a star order. (Or as many directors say: “pull inventory”) These Directors ALWAYS close the sale/recruit for the recruiter … Auri for instance, instructs her consultants, “to help me build your teams, please allow me to close all of our guests before answering Consultant questions”.

Do we need the FTC to step in with regulations controlling this frontloading behavior? Look at those numbers one more time and YOU be the judge!