How often do we hear from the pro-Mary Kay side that MK consultants sell lots of products??? Yes, we frequently hear that gobs and gobs of Mary Kay cosmetics are ending up in the hands of gleeful customers who slather themselves with the junk. So how much do they really sell???

One national area in Mary Kay gives us a glimpse of just how much (or little, as the case may be). Allison LaMarr is one of the “do-it-fast” national sales directors in Mary Kay. She is held up as a beacon of hope for everyone… that if they just “work hard enough,” they can “have it too.”

I have been openly critical of Allison’s quick rise to nsd, because I believe such a rise can only be done with extreme frontloading of new recruits. Yet Mary Kay supporters have said “she teaches her people to sell!!!”

Really? I thought it would be fun to see just how much selling goes on in the LaMarr Area. Below is a listing of the area’s Top 20 consultants for the 10 months through April 2007. The below figures are based upon wholesale purchases the consultants made from Mary Kay. Now we’re going to pretend that these consultants sold everything they purchased from the company. We know this isn’t the case, as there is lots of “stocking inventory” going on and generally low demand for the products. But we’ll pretend here that this stuff was sold, just for the sake of argument.

Assuming these consultants were in Mary Kay the entire 10 months, I have calculated the average monthly retail that is assumed sold by these Top 20. Using a generous 40% profit on those sales (generous because of the costs involved in selling and the fact that lots of sales are discounted, which eats into the profits), you see the average monthly profit for these Top 20.

Here’s where it gets interesting. Currently Allison lists 24 sales directors in her national area. Assume each unit has 40 consultants. (That is probably a bit low, but I’m trying to be conservative in my estimates.) That means there are at least 960 consultants in the LaMarr Area.

And 940 of those consultants are profiting less than $540 per month, which is the amount the last person in the Top 20 is profiting. (If she sells all of her inventory purchased, and we know she doesn’t.)

And notice that not one single consultant out of those 960 consultants will be on the Court of Sales, which requires $36,000 in retail orders from the company. None of them are even close, 10 months into the seminar year.

And not one. Not even one consultant in Allison’s area is making a living off selling Mary Kay products. The top person in the entire area isn’t even profiting $11,000 a year. 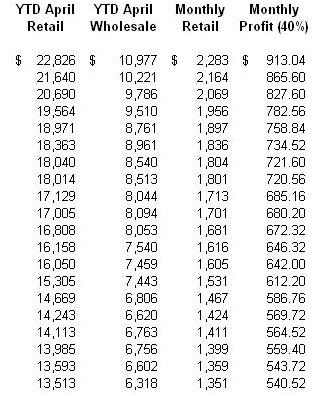 So are these consultants really being taught to sell products?